WHERE WATER COMES TOGETHER WITH OTHER WATER
Oświęcim, Poland (2015-2018) 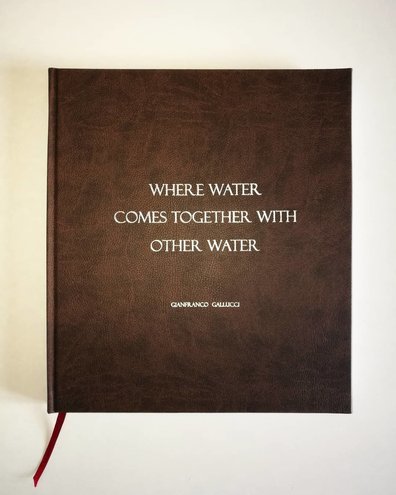 This is a story about history and memory, a story without a plot, a contemporary tale about a place named Oświęcim. The town raised at the confluence of two rivers, Soła and Vistula, between the X and XI century. Located on a border zone in the South-West of modern-day Poland, was for centuries under the control of many reigns, and changed often its name, also in its German version, Auschwitz. In the second half of the XIX century, it became an extremely renowned center with a big Jewish community, that peacefully coexisted with the Catholic one, earning the epithet of “Jerusalem of Oświęcim”.
Before telling this story, I wasn’t aware of the term Auschwitz, historically, represented the German version of the polish name Oświęcim. That they were simply two different names of the same place. I thought, like everyone else without a deep knowledge of this, that it was exclusively the name of the most famous extermination camp of the world, and moreover, I didn’t know anything about the existence of a town named Oświęcim.


This project represents the first chapter of a trilogy about Memory and Time, – by the definition of Time, in Saint Augustine philosophy – to underline the pivotal position of the Present as the only «place» where everything happens, in relation, in this case, with the idea we have about History and how we deal with our “Past”, defined as “The Present of the Past” and corresponding to the element of «Memory».
Therefore History is the first instrument presented here in this chapter, as something we should learn to use in order to better manage our Present.
When I was a child at the primary school, I visited the “Risiera di San Sabba” in Trieste (Italy), a rice factory, converted by Nazis in a concentration and extermination camp during the Second World War. Despite its small size and with only one crematory, the vivid image of the place and the story told us by the guide, created a persistent memory that accompanied me throughout my life. When I approached photography years later, I promised myself that one of my works would be on the issue of the Shoah. But when I started working on it, I realized that producing further images of what was once extermination camps to talk about this, was not the best solution for me.
I probably needed to free myself from the legacy of that childhood memory, and I had the opportunity to do it, thanks to this work. I needed to forget and, reflecting on it, I thought that photography could help me in doing this. I realized that this medium lets people forget too. – Not to forget entirely, but by remembering differently.- So I decided that the only way to talk about this was actually without doing it, and to show it from a completely different perspective. To make a mirror out of our contemporary society as a way to acknowledge the existence of the event even if not showing any trace of it photographically. It is not in the form of a geographical, political, or historical perspective, but simply temporal. Looking at the past from the perspective of the present moment shows how the past is not detached from us, but extremely contemporary, and how History and Memory represent those tools able to depict the Present as the only place in which everything confluences and exists. Rather than talking about Shoah “directly”, it was better to reflect on Memory and History today.
From these premises I started reflecting about the symbolic meaning and the relation of the two terms Auschwitz and Oświęcim. I realized that to the world, the first was well known and uniquely associated to the most tragic event of our recent history, actually its “punctum”; while the second was almost unknown to everyone.
Therefore, a first intention was to relieve this town from the negative mark of the Past, which existed due to the handful of years of Nazi occupation, showing it as it is, a normal place, with an ordinary life, as everywhere else, and the perfect mirror for each of our backyards. I wanted to restore the cultural dignity and the right fame to a town that for too long has carried the burden of a mark for which it has no fault, and show how life always continues and survives close to “death”.
The second aim was to use this symbolic place in order to talk about something wider. To have the opportunity, through this special “case history”, to reflect on the role of History and Memory in current day society, revealing the pivotal position of the Present in all the things that deal with Time. Showing how these two elements are extremely alive and contemporary and how they must be preserved to continue to be fundamental tools for the future of society.


The first research phase of the project started in 2015 and led to the production of an essay and a photobook in 2018. All the material that I personally collected and elaborated from public and private archives, as result of the initial research phase and during the realization of the photo work in the two long stays in 2016 and 2017, has been presented in the form of a website, completed in 2020. It represents an online archive, potentially expanding, concerning the story of this place named Oświęcim. The entire archive material consists of: private family album snapshots; old and new postcards; historical archive photos of the town; old objects belonging to a private museum; Google search images of the word «Oświęcim»; a book of poems by an author from the town; and the scans of a survey that I wrote and distributed to the citizens, in order to have an idea of their relation with the presence of the most famous concentration and extermination former camp of the world in their town. In addition, using the same questions of the survey, exist also some video interviews that I recorded with some residents.

All this is accessible on the official website of the project:

THE CONTEMPORARY GUIDE TO OŚWIĘCIM


All contents © Gianfranco Gallucci. All rights reserved
Made with Viewbook